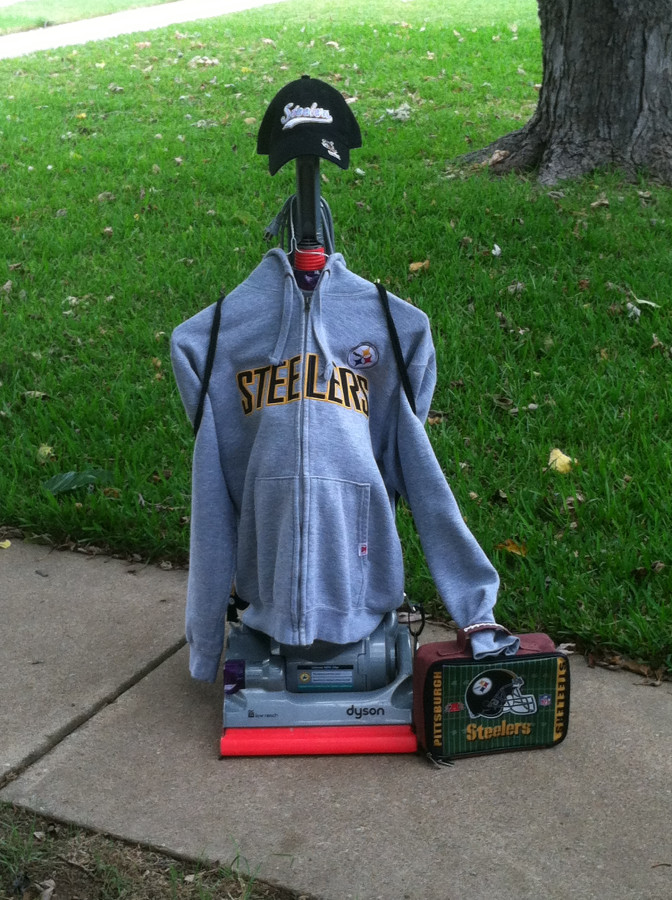 I'm just checking to see how this all works. Attached is a pic of my kid, Mike Dyson.

If you don't know about my kid, you obviously aren't my FB pal.

Hey everyone! I hope this LJ post reaches you well.

If anyone would like to be friends on "FB", please leave a comment here, and we will catch up!

Time just seems to be flying by lately. Although this past weekend was relaxing, it just seemed to go by so fast. On Friday night I watched WWE Smackdown. On Saturday we had a nice breakfast, then did some shopping at Target. We had spaghetti with Italian sausage for dinner, with garlic bread and chenin blanc wine. Saturday night we watched "Rumor Has It.." on DVD while sippin' wine, then watched some more TV. On Sunday we had Taco Bell for lunch and watched two baseball games on TV. Like I said, it was a nice, relaxing weekend.

In other news, Barry Bonds is still sitting on #746. He's been in a slump, but that's okay. He'll work his way out of it, and we'll be seeing a new Home Run King in no time. I still rock my Bonds jerseys and shirts on the weekends to support my homeboy, and still defend his legacy every Wednesday night at the card shop. Although I don't agree with Bonds' decision on not giving any of his artifacts to the Hall Of Fame, I do think he'll change his mind by the time he breaks the record.

If there's any baseball player that everyone should despise, it's Roger Clemens. I mean, if all of these "purist" baseball fans who love baseball for what it truly is, then Clemens should stand out far more than Barry Bonds. How can anyone justify him as being any type of "team player", leader or role model when he purposely only plays half the season? He literally "rents" himself out to the highest bidder for two years in a row now, with so many stipulations about being on a contending team and pitching when he wants. There's no "team player" mentality for a guy who decides he wants to pitch in the middle of June. Almost half the season is already played, buddy.

Sure, I'm bummed out that my Pistons were eliminated by the Cavs, but I think this NBA Finals will be a good one. There's tons of hype and spotlight on LeBron, and since the media is out to making the Spurs look like the "bad boys" of the NBA, this championship series will see plenty of air time on ESPN SportsCenter. I think the Spurs will win in six, and Tim Duncan will shut up his critics once again.

I'm about 2/3 through the "Hardcore Diaries" book by WWE wrestler Mick Foley. His other two books were more interesting and with more detail, but this one still doesn't disappoint. Foley's writing has a way of capturing you, making you feel like he's talking to you, sitting right next to you.

Well, I'm out like the trash on a Thursday.

You know, I am proud to say that I am officially billiam's

billiam very first fan and LJ "friend". I was the first outsider/stranger to be on the legendary Billiam's LJ friends list. But I am even more proud to say that I'm friends with Billiam's soul and creator, Joe , aka

Anyways, Billiam first approached me a long ass time ago, making a random comment in my journal, about how I look so much like Tupac Shakur (my LJ icon.) Right away I knew this guy either had to be a complete idiot, or a creative genius. After reading his journal for a bit, I knew that whoever was behind this Billiam character was a very creative, imaginative, and intelligent dood. So, "billiam" caught me once on AIM, and we started talking. After I gained his trust and confidence, I met the man behind the mask, Joe. Joe is a great guy. I have yet to meet him in person, but we talk on the phone to each other (he lives in friggin' Canada) quite often and catch up on whats going on in each others' lives. Our friendship evolved from just talking about Billiam and LJ to actual real-life stuff that "friends" talk about. Joe is a great guy, with a big heart, and tons of writing talent. I hope that he gets a break. He has a wonderful wife, and they seem to make each other very happy. I know if Joe and I lived closer, we'd hang out and be good friends, just like the same I feel about my Boston buddy

Anyways, Joe has always kept his journal and Billiam's totally seperate. He never cared if people found out who he was, he doesn't keep it a secret anymore. Billiam is here on LJ to entertain, and that he does, to 600+ LJ users. I have helped Joe a few times with ideas and storylines for his billiam character, and even created a character of my own, gave my character an LJ, and Joe and I created the legendary "feud", where, in the end, my character "killed" Billiam. Joe even got Billiam black & white press, a full 5 page article in Yahoo magazine, and my character was even in there too, with a picture of both of us! (Another little accomplishment that I'm proud of, thanks to Joe.)

Today, Joe made history, and posted himself in Billiams' journal. He walked on billiam's stage of 600+ fans as himself, and announced this:

I want to help Joe. He is a great guy. I wouldn't do this if I didn't care. I called him up tonight and pitched him a few ideas, and hopefully I helped him out. There are a lot of people who look at Billiam and think the whole thing is just stupid, but Joe has really molded billiam into an LJ legend. He is an "imaginary icon", if you will. Billiam has a history, a whole life of his own, his own website and store,.........Joe took it from nothing and turned it into this. Everybody has heard of Billiam.

If Joe decides to run with my idea, then I'm all in to help him out. I'm not asking you guys to, I'm just writing my thoughts in my journal. Take it how you want to.


In other news, I won't be around again until Wednesday, so, cheer on Barry with me! Get that ring, Barry Bonds!

I wasn't around all day Fri or today, so I couldn't post it until now.

I am, and will always be a Laker-Hater, but living in So. Cali for 15 years, I know how much he meant to the Lakers. He WAS a Laker, and should get a jersey hung from the rafters.

I always made fun of him, as a joke, the way he mispronounced names, and called players by the wrong names completely...........but it was all in fun. Truth be told, when you think of Chick Hearn, you think Lakers. You think NBA. He was a legend, and a well respected man here in Cali.

This dood at work had these little mini-bobbleheads on his desk. I asked him where he got them, and he told me, Post Cereals are giving them away in their cereal boxes! Dope!

Ok, I'm seeing more and more peeps on LJ use some terms that, I have never seen before in my life!

What does "huzzah!" mean? Is it a good thing?

And what is "roXor" supposed to mean? Is that, "rocks"?

*does the Homer Simpson shrug* (confused)

And people have the nerve to pick on me when I mess around and type in ebonics........

I wish Barry would come back soon........Sportscenter highlights just aren't the same.......

Kenny Lofton went to SF. I think that's great. I was always a Lofton fan. I dig stolen bases.

Cliff Floyd goes to Boston. I wonder what Offy thinks of that. That's one hell of an outfield, with Manny and all......

Ray Durham goes to the A's. Ray is my favorite 2nd baseman. With Eric Chavez and Tejada, that's a great infield.

Scott Rolen goes to the Cardinals. I wonder what "thedeadone" has to say about that. I'm happy. He wasn't happy in Philly.

FYI: Scott Rolen, Cliff Floyd, and Kenny Lofton are all on my fantasy teams. Cowinkydink? I don't think so.......

ok, now to the point. I have a half-brother who lives back in PA, who is now 16, and I hardly know him. Seriously. I haven't been out to visit since 1996, and we were never close in the first place. We never talk. Never. I don't even really like him. He's disrespectful to my mom and grandma, and is a dork. I honestly don't really consider him my brother.

Anyways, on Friday I get an email, from my brother Brian. Out of nowhere. Weird. He wants me to join his fantasy football league on Yahoo. I said I would, and the draft is tonight.

He called me "bro." I should punch him in the face.

I'll probably chat with him tonight during the online draft.